Pleasing to the Eye 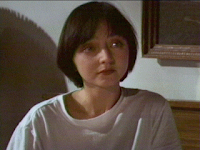 In many ways, it makes me think of how television and movies  portray, well, pretty much anything. When you watch a detective movie, you’ll see someone sit at the computer, type for 10 seconds and get the information they want. When you watch Law & Order, you never see how appallingly slowly anything having to do with police work or courtrooms actually happens.  Medical dramas never shows anyone waiting for hours in the emergency room. Life in TV shows and movies is generally super convenient, except in the ways that move the storyline along. Expecting the real world to work like TV is almost always going to lead to disappointment. So why should we expect porn to be any different?

Personally, I’d love to see more sexually explicit movies that showed sex that looked like it feels good. There are  some, like Tony Comstock’s movies, as well as the movies that Abby Winters has made. There are also the classics, which still have a lot of fans. And I have to give a shout out to Good Releasing (Good Vibrations’ new video production arm), with some super hot movies that feature truly pleasurable sex.